Why protect and restore the Columbia River Estuary? 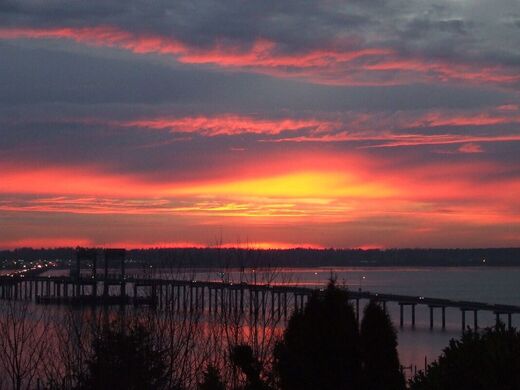 Youngs Bay Bridge at Sunset
Signed in 1961, the Columbia River Treaty between Canada and the United States authorized dams to be built along the length of the river and its numerous tributaries from central British Columbia through Washington and Oregon. The purpose was to control flooding and meet the demand for hydroelectricity in the neighboring communities. In addition to dams and infrastructure already in place, this treaty led to further development, resulting in 14 major dams and diversion of various streams and smaller tributaries.
Of the many impacts to the natural habitats during and beyond this period of development, one of the most adverse effects was to the life cycle of several anadromous species of fish -those that spend their adult life in the ocean, and migrate to breed in freshwater. Such fish include Chinook, Coho, Chum and Steelhead salmon, as well as White Sturgeon and Eulachon (smelt). Migratory pathways to adult spawning areas were obstructed by dams, and floodplain wetlands critical for juvenile rearing and growth on the way to the ocean were disconnected with levees and tide gates . Combined with impacts from overfishing, hatchery practices, habitat loss, and the concentration of predators, most fish stocks experienced rapid declines and loss of genetic diversity.  The subsequent lack of resilience in wild fish stocks means not only jeopardy for the fish themselves, but for the entire ecosystem that depends on the fish for nutrition, including animals, birds, indigenous tribes, and local fisheries.
The estuary at the mouth of the Columbia River, located near Astoria, OR, is also a very productive mixing zone between river and ocean processes – physical, chemical and biological.  In the estuary, factors such as pollution from upstream urban areas, diversion of wetlands and streams, and increases of predatory populations continue to threaten juvenile salmon and the multi-generational livelihoods and traditions of the people who live here.